Combi Aircraft are a specialized type of aircraft that are used for carrying unitized cargo loads. This means that the cargo is packed into specific sized containers that can be easily loaded and unloaded. This is different from traditional cargo loading, where individual pieces of cargo are loaded into the aircraft.

The main advantage of Combi Aircraft is that they allow for much faster loading and unloading times. This is because the containers can be moved directly from the aircraft to the ground, without having to go through any additional handling. This makes them ideal for use in logistics operations.

Combi Aircraft are becoming increasingly popular in the logistics industry, as they offer a number of advantages over traditional methods of cargo transportation.

For example, they are able to carry more cargo, they are faster and more efficient, and they are cheaper to operate. This has led to an increase in the use of Combi Aircraft for cargo transportation around the world.

The disadvantages of combi aircraft are that they are more expensive to purchase and operate, and they require specially trained personnel to operate them. However, the advantages often outweigh these disadvantages, making Combi Aircraft a popular choice for cargo transportation. 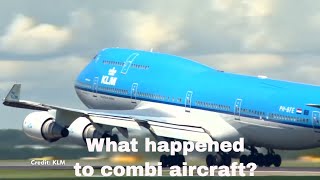 WHAT HAPPENED to COMBI AIRCRAFT?