A Container Terminal in logistics is an area designated to be used for the stowage of cargo in containers that may be accessed by truck, rail, or ocean transportation.

This area can be a dedicated terminal facility, or it can be a portion of a seaport, airport, or railway yard where containers are handled. container terminals are an important link in the global supply chain, and they play a key role in the movement of goods around the world.

Third, container terminals are typically located in strategic locations where they can serve as a gateway to a particular region or country. For example, a container terminal might be located near a port where goods can be shipped overseas, or it might be located near a major transportation hub where goods can be transferred between different modes of transportation.

Container terminals are an important part of the global supply chain, and they are playing an increasingly important role in the movement of goods around the world. 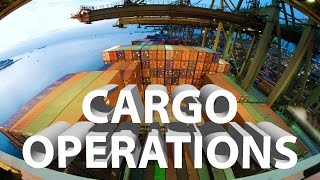 How are Containers Loaded? | Cargo Operations on Container Ship